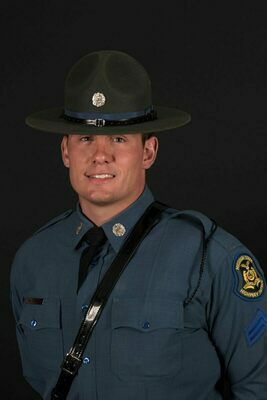 Captain Erik A. Gottman, commanding officer of Troop B, Macon, announces Corporal Kyle V. McGivney is being promoted to the rank of sergeant effective July 1, 2022. He will be designated zone commander of Zone 8, Marion and Ralls counties.

Sergeant McGivney was appointed to the Patrol on January 16, 2013, and after graduating from the Patrol Academy, was assigned to Troop B, Zone 7, Knox and Lewis counties. On August 1, 2018, McGivney was promoted to the rank of corporal and designated the assistant zone commander of Zone 9, Marion and Ralls counties. On June 1, 2020, McGivney transferred from Zone 9 to Zone 7, Knox and Lewis counties, as the assistant zone supervisor.

He is a native of Apple River, Illinois, and graduated from Warren High School in Warren, Illinois. He holds a bachelor’s degree in business management/health from Luther College in Decorah, Iowa. He and his wife, Alex (McFadden), have two children.

A photo of Sgt. McGivney can be found with this news release on the Patrol’s website.

Too many people die in traffic crashes each year in Missouri. The choices you make when you’re behind the wheel matter. Make good choices, so you’ll never have to say, “If I could just go back...”

Steve Forbes: We Can End Inflation Quickly, Her...