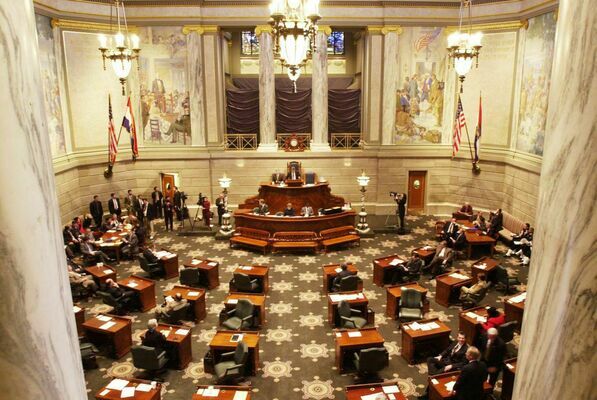 “We’re still talking to folks,” Senate Majority Leader Caleb Rowden, R-Columbia, said at a news conference. “Obviously, it hasn’t been an easy process, but we feel good about the product that we’re approaching.”

The current congressional district boundaries — last drawn in 2010 — have already been challenged in court by at least one candidate. Paul Berry III, who is running against U.S. Rep. Ann Wagner in the state’s 2nd Congressional District, filed a lawsuit against the governor and secretary of state on Tuesday.

Berry argues that it’s unconstitutional to use the old map because the population in some districts has grown much more than in others. Districts must be redrawn every 10 years to reflect population shifts.

Cole County Circuit Judge Jon Beetem on Thursday denied Berry’s request for an expedited hearing on the lawsuit. Beetem’s order noted that the legislature is still in session and is not scheduled to adjourn until May 13.

“There is still time for the General Assembly to act,” Beetem wrote. He set the case for scheduling and an update on April 15.

The legislature will take a break next week and reconvene March 21, marking the halfway point of this year’s legislative session. In the nine weeks of session so far, senators have struggled with clashes among Republican members and issues with decorum, passing very little.

One of the bills still awaiting approval is HB 2117, which establishes new boundaries for Missouri’s eight congressional districts and was first brought to the Senate floor in late January. A group of conservative senators objected to the proposed map, which reflected a likely 6-2 Republican majority in the state’s delegation. Going against party leadership, they instead proposed a map that could send seven Republicans and one Democrat to Washington, D.C.

Failing to approve the district boundaries by March 29 — the filing deadline for those wishing to run for Congress — could cause difficulty for candidates, and may lead to the court system drawing the districts.

Rowden said pushing back the filing deadline, to give the Senate more time to make an agreement, is a possibility.

“I don’t necessarily view it as a deadline,” Rowden said. “I do very much think it presents kind of a marker that definitely could lead to additional action from external entities via lawsuit or anything else. It is certainly on the radar.”

Republicans want to avoid the courts getting involved, Rowden said, because it “makes us look bad” for not coming to an agreement, and it could also introduce the possibility of having a 5-3 map approved instead — which would cost Republicans an additional seat in Congress.

Members of the Conservative Caucus, who advocate for the 7-1 map proposal, agreed that some agreement must be reached soon. Sen. Bob Onder, R-Lake Saint Louis, said the Senate was “way, way, way behind the eight-ball.”

“For heaven’s sakes, potential congressional candidates … How do they know what they’re going to be running for and who they’re seeking to represent?” Onder said.

Senate Democrats also hope the Senate can reach an agreement without court involvement.

“It’s better if we do (pass a map), because we’re doing a constitutional duty,” said Senate Minority Leader John Rizzo. “We’d like to be able to have a functioning Senate. We’d like to work it out. But we don’t control the board, and we’ll see what happens.”