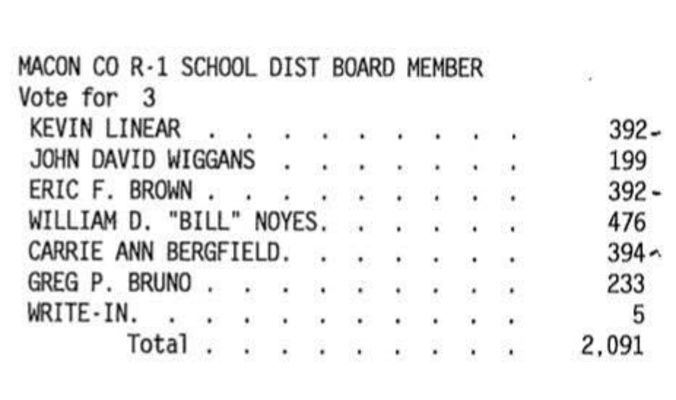 MACON, MO -- The Macon County Clerk's Office conducted a recount on Wednesday morning after Tuesday's General Municipal Election. We last reported to you that in the election for the Macon R-1 School Board, both Kevin Linear (Incumbent) and Eric Brown were tied at 391 votes each. There are three positions open for the board and both Bill Noyes and Carrie Bergfield lead the race with Noyes at 476 votes and Bergfield at 393 votes; leaving the third spot in question after Linear and Brown ended up in a tie. The clerk's office confirmed to The Home Press that one ballot had to be manually counted after failing to read electronically. This ballot added one vote to Bergfield, Linear, and Brown. Bringing their respective unofficial vote totals to Bergfield 394 votes, Linear 392 votes, and Brown 392 votes. Still resulting in a tie between Linear and Brown. The Macon County Clerk, Shirley Sims, will be submitting her office certification to the state by Friday so that the results can be officially certified.

Macon R-1 Superintendent Scott Jarvis stated that right now the district is consulting the school attorney in regards to what is next and how this impacts the re-organization of the Macon R-1 School Board. There are two basic ways to settle a tie: a coin flip/name drawn out of a hat (both candidates have to agree) or a special election between the two. The decision of which path to take in settling a tie, will be made by the candidates themselves (Kevin Linear and Eric Brown).

The Home Press will release an update when the district provides more information and a decision is made between the two candidates in how to settle the tie.