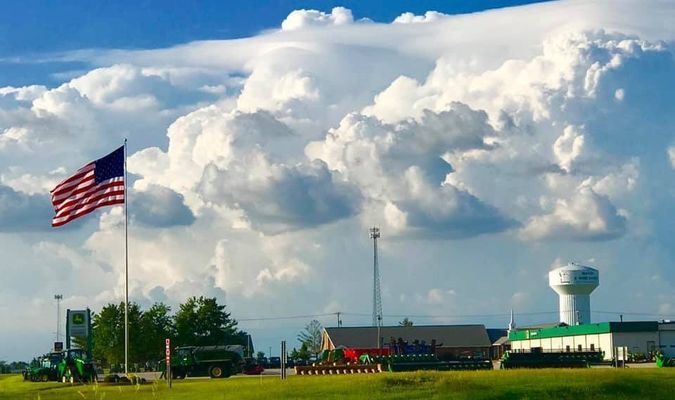 MACON, MO -- On June 2nd, voters within Ward 1 of the City of Macon will cast their votes between Caleb Dwiggins and Misty Blue. It is the remaining competitive race on the ballot for the City of Macon. Councilman Taylor Wesley of the first ward announced that he wouldn't be seeking re-election due to other career opportunities and also personal and family reasons. Councilman Tony Petre (Ward 2) and Councilman Jerry Thompson (Ward 4) are both unopposed on the ballot. For Ward 3, Councilman Jerold Carr is expected to be re-elected after Mollie Gilliland announced that she would be suspending her bid for the City Council; however, her name will still be listed on the ballot as they were already printed prior to her announcement. We reached out to both Caleb Dwiggins and Misty Blue for an interview.

CALEB DWIGGINS: Caleb Dwiggins is originally from Macon, Missouri where he graduated from Macon High School in 2002. After his education at MHS, Caleb later received a Bachelor's in General Agriculture with an emphasis in Plant Science from the University of Missouri. He is currently married to Amy (Wilson) Dwiggins and they together, they both have two kids, Wilson and Ian. The briefly lived in Columbia, Missouri while Amy worked on her dissertation ultimately receiving her Doctorate (she teaches at Macon R-1). They own several rental properties around town providing house options to local residents. Mr. Dwiggins currently works for Berger Horticulture which is out of Canada.

MISTY BLUE: Ms. Blue is originally from Pleasant Hill, Missouri where she graduated from high school in 1963. After college she took several online college courses but ultimately set her sights on owning her own businesses. Living in Denver, Colorado, Misty owned both a towing and janitorial business. She currently resides in Macon while working at the Randolph County Jail in Huntsville, Missouri serving as the Kitchen Manager. Ms. Blue does not have a husband but has five kids. One currently lives in Macon while the other live in Kansas City and Las Vegas (where Ms. Blue lived prior to settling down in Macon). Her kids are Justin, Shane, Travis, Mandy, and Wyatt.

2. Why do you want to serve on the Macon City Council? What makes you the best for the job?

CALEB DWIGGINS: "I want the city to grow. Not the size of Columbia, but with growth comes opportunities for the younger generation to come back to this town and overtime, that will begin to provide more opportunities for the town including revenue. I think what makes me best for the job is being personable. I am strictly there to work for the electorate and to help them understand city issues. Throughout my career so far and the other things that I am involved in, managing multiple needs while bringing them together to get things done is what I would bring to the table."

MISTY BLUE: "I figured I would apply to actually make a difference. I am tired of people complaining all of the time and believe that I can make a difference and in the end, at least I tried. Something needs to be done and it's time to get off the couch and try. Ambition and involvement are what drove me to file for this position. The desire to help give our kids something to stay here for. We need better paying jobs and entertainment in this town. We also need affordable housing. I am a former businesses owner and by no means, a politician."

3. What is the most pressing issue facing Macon?

CALEB DWIGGINS: "Revenue. We have to adapt considering that we can't change the trends. Online and bigger businesses will continue to get a lot of business in a small community. We must continue to support local businesses as much as possible but we have to get creative. One of the biggest ways I can see the city begin to make a lot of progress is reaching out to our neighbors and other small towns our size. See what they are doing, what works, and bring that back to Macon."

MISTY BLUE: "Young people leaving. I think this problem creates several other issues such as our town getting smaller which means a loss of revenue. We need to invest into the next generation. A lot of my kids have moved to Kansas City and Las Vegas because that is where the better paying jobs are and for them to have a social life. Our young people need better jobs and better entertainment. For example: A rodeo. Macon doesn't even have a rodeo and I think that is just one example in which could make a difference."

4. The pool. What is your overall view on the pool issue in the city and is the current Mayor and Council doing the right things in regards to getting a pool in the City of Maples?

CALEB DWIGGINS: "I am in favor of Macon getting a pool. We need to make sure that we are smart with our money so that we don't create problems for future councils and generations. I agree with what the current council is doing in regards of saving up funds to pay-off a good chunk of the expense that constructing a pool would cost."

MISTY BLUE: "There needs to be a pool. It definitely gives something to do for younger families and area youth during the summer. I honestly don't know much about the pool issue."

5. What could we be doing as a city to bring in more revenue?

CALEB DWIGGINS: "Like I mentioned before, we need to reach out to our neighbors and the towns that are similar in size to see what is working for them. We are at a crossing in the Midwest. We are a hub in the middle of Chicago, Kansas City, and St. Louis. What are we missing? In times like today we will be required to become creative and to adapt to the world around us. I think that will be the biggest lesson especially after COVID-19. It all begins at getting in the middle of the conversation, reaching out to those around us, and becoming creative."

MISTY BLUE: "We need to be surrounded by people who can find businesses and companies to come to Macon. Living in the western United States, Chocolate Festivals were a popular thing in those parts and I was always amazed at how much revenue and attraction they brought to those towns that hosted them. I think a festival as such would be a great thing for our town."

6. What is your closing remarks to voters?

CALEB DWIGGINS: "I am invested in our town. This is where I want my kids to be raised and I want to help make this town the best version of itself that it can possibly be. I will listen to the voices of constituents and represent you the best way possible. I want to make a difference in Macon. I would appreciate your support on June 2nd for Ward 1 Councilman."

MISTY BLUE: "I will do the best that I can. I'll give it my all and listen to what voters have to say. I would appreciate your support this Tuesday (June 2nd). In the end, at least I tried."

Voters will head to the ballot box on Tuesday, June 2nd.

Chip Seal Projects Set to Begin for Routes in A...