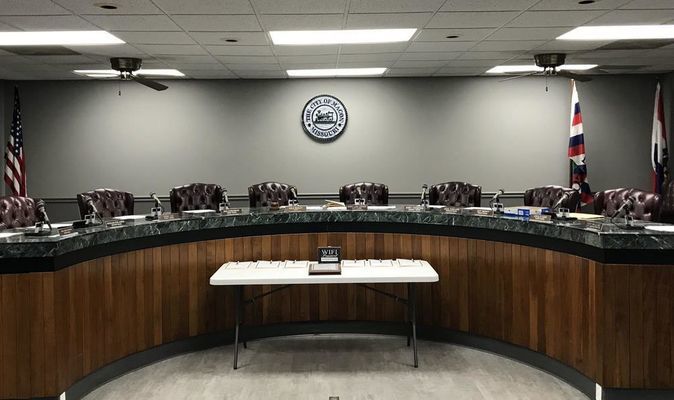 MACON, MO -- On April 1st, Councilman Jeff Brown of the third ward resigned his position on the Macon City Council after moving to Shelbina, Missouri with recently getting hired with the City of Shelbina as a police officer. According to Missouri State Statute 77.450, in the situation of a vacancy on the city council, the mayor shall make an appointment with the advice and consent of a majority currently sitting on the council. The person who is appointed will serve until the next April election. Jeff Brown was last re-elected in April of 2019 with the next election being in April of 2021. We spoke with the Mayor of Macon, Talt Holman, about the matter and he stated to the paper that he is expecting to appoint someone by the end of the summer at the July council meeting. Additionally, the city provided this statement in regards to Brown's time on the council:

"Jeff Brown served the citizens of Macon for over 25 years; serving 21 years with the City of Macon Police Department and 5 years as an elected member of the City Council. His public service and government leadership show a commitment to his community that is truly appreciated. We wish him every success in his new position with the Shelbina Police Department."

We reached out to Jeff Brown about his time on the council and his recent resignation. He provided us with this statement:

"On April 1, 2020 I resigned my position of City Councilman for the City of Macon, Third Ward, to which I was elected in April of 2015. I relocated to Shelbina, Missouri, I have accepted a position with the City of Shelbina Police Department as a police officer. I have relocated my residency to Shelbina, Missouri due to seeking further position(s) within the Shelbina Police Department. During my time on the council, I strived to do my best in making decisions for the citizens of Macon, which of course was not the popular choice to some. I attempted to make all decisions from my heart, as I believe this is where the best decision making comes from. I believe my 20 plus years of being an employee for the City of Macon helped me in understanding what my position on the council needed to represent. I believe the employees and services provided to the citizens of Macon were especially important. The one thing that always seemed to be a struggle was finding the funding source in trying to make Macon a better place to live in visit. I have lived my entire life in the City/County of Macon and have many good memories of our city and citizens. I have worked in City of Shelbina and in the County of Shelby since 2014 and I have strived to do my best in making decision for the citizens of Shelbina. I have been honored to work and live in two great communities. I would like to sincerely thank everyone who has and will continue to support my decisions as I continue working for the citizens, as I have done my entire adult life. Thank you for allowing me to serve, god bless, sincerely Jeff Brown."

The qualifications of a councilman are that they be at least 21 years of age, a citizen of the United States and an inhabitant of the city for one year next preceding his/her election, a resident of the ward that he/she is elected (six months preceding the election), be a voter in the Sate of Missouri, and have no outstanding unpaid taxes or fees.