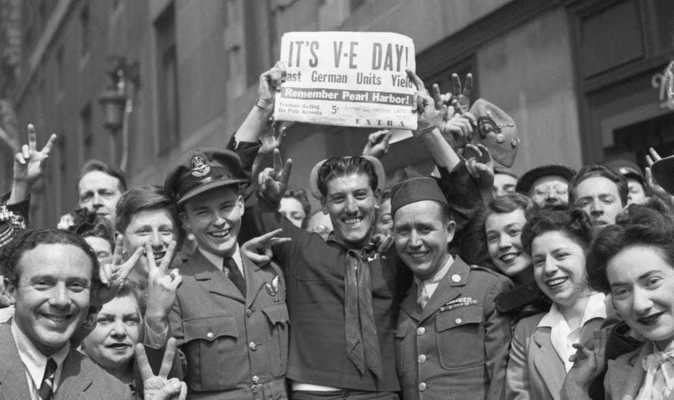 MACON, MO -- 75 years ago yesterday, (May 7th, 1945) marks the unconditional surrender of the Nazi forces that shook Europe from 1939 until 1945. For the allied nations (United States, England, and the Soviet Union), a day later on May 8th marked jubilant celebration as the war in Europe ended. Large crowds took to the streets in Moscow, London, New York City, Paris, and elsewhere to celebrate the allied victory with the fall of Nazi Germany and other axis powers. This day became known as V-E Day (Victory in Europe Day). Three months later on August 15th, 1945, the Japanese Empire surrendered bringing the Pacific Theater in World War ll, to an end. This day became known as V-J Day (Victory over Japan Day). In total, the United States had roughly 407,000 military causalities along with approximately 12,000 civilian causalities. 3% of the world's population at the time perished during the deadliest military conflict in history. It is estimated that 75 million people were killed (military and civilian) including an estimated 11 million people perishing in the Holocaust while an estimated 199,000 were killed by the atomic bombs dropped in Hiroshima and Nagasaki.

Living in New York City at the time, local Macon resident Tanya Friedman Nelson, was turning ten years old during the surrender of the axis powers. "We were in Far Rockaway for the summer, people jubilant everywhere! It was my first time seeing people throwing and rolling out toilet paper," recalls Nelson when asked about V-E Day. Far Rockaway was a beach that Toni Nelson visited with family in Long Island, New York. Nelson also stated that V-J Day later in August seemed "more joyous" than V-E Day in May. Toni Nelson went on to state, "Kids in school had such a sense of patriotism during the war. With only the radio and daily newspapers for the news, or going the the movie theater and seeing newsreels about what took place days ago, as kids, I doubt we really related. The war was so far away, and if you didn’t have a family member fighting, how could we relate? Think about the connection the service members have today connecting with family. My memory of the war years didn’t begin on Dec. 7th , 1941. I was six. Kids did things for the war effort, saved paper, cans, aluminum from cigarette packs. Drew posters hating our enemies, and didn’t hoard or waste."

During the war, major cities like New York City had air raid drills (blackout drills). The drills were to prepare citizens for a possible emergency during the war. During evening drills, every street light would go off at a schedule time and everyone was expected to shelter in place while drawing their curtains and turning off lights. Air raid wardens would police the streets to make sure everyone was abiding and complying. The idea behind these drills were to protect industry, cities, ports, and Americans from being possibly bombed by Germany or Japan; enemy planes couldn't bomb/target what they couldn't see. Toni Nelson recalls these drills describing them as being a team effort and if you didn't comply, the wardens would make sure you knew what to do for next time. Mrs. Nelson also recalls moments in which the drills would take place during school: "We wore little round plastic disks with our name and address on it. It was for ID. We had air raid drills in school. We would all be sitting on the floor in the hallways. When it was over, the children were divided into groups according to where you lived. No matter what your grade was, a teacher was assigned to take children home that lived on the same block. These were 3 to 6 story walk ups, so could be several kids she was responsible for. When we moved to Olinville Ave, until my new ID came, I had to wear a round cardboard disk with my name on it. Not sure I ever got a permanent one."

Toni Nelson was born and raised in New York City (the Bronx to be more exact) along with her brothers Lee and Bob. Toni is Jewish and has immediate family that immigrated to the United States. "My dad was born in New York. His dad from Poland and mom from Austria. My mom was from Russia," stated Nelson. In February of 1952, Toni met Jack Nelson (from Macon) in Long Island, New York through friends. Jack's Air Force buddy happened to be dating Toni's best-friend at the time. Two months later, April of 1952, Jack and Toni were married. Jack served in the Korean War in the Air Force from 1948-1954 as a crew-chief on the P-51 Mustang. In June of 1954 after being honorably discharged from the Air Force, Jack and Toni moved to Macon where they still reside to this day; recently celebrating 68 years of marriage. Jack and Toni have six children: Tom, Deb, Scott, Mike, Mark, and Tanya.