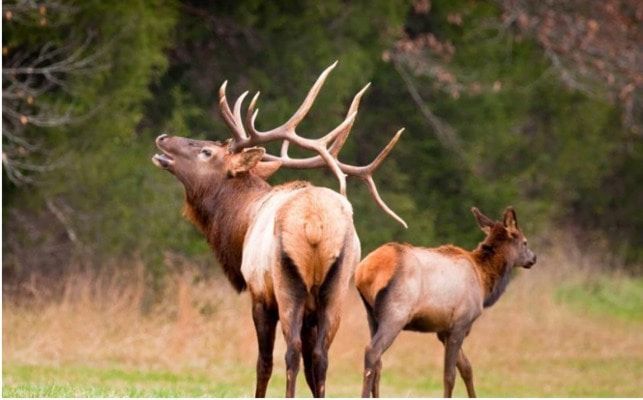 JEFFERSON CITY -- The Missouri Department of Conservation announced after a meeting on April 8th that they would be issuing five licenses for the 2020 season to hunt bull elk. The 2020 elk hunt in the Show-Me-State is set to be the first in recent history and will take place in October and December of 2020. The archery portion will be held from October 17-25 while the firearm portion being held December 12-20. For individuals trying to draw for a general permit, a $10 application fee is due up front. Landowners in the respective area of the hunt, will not have to pay the application fee. If selected, there is a $50 permit fee. For those interested in putting their name in the hat, you have from May 1st until May 31st to submit your application online. It is estimated that starting on July 1st, applicants can view whether or not they have been drawn. The drawing will be through a random lottery. Permits are nontransferable. Hunting is to be held in a specific area in Southern Missouri (Carter, Reynolds, and Shannon Counties). According to the department's website, beginning in 2011, the Missouri Department of Conservation began restoring the elk population in the state of Missouri by introducing roughly 100 elk in the Ozark area of Southern Missouri. Since then, their numbers have grown to over 200 elk with the herds expanding their range into surrounding counties.

To view a news release by the Missouri Department of Conservation that is inclusive of more information about the process, regulations, and application, click on the following link: https://mdc.mo.gov/newsroom/mdc-announces-missouri%E2%80%99s-first-elk-hunting-season-coming-fall?fbclid=IwAR2ZDOXyGj-trB5Ph2O8ixLv7BDeX5kRtWJD_OgKMy91gYmX-Z4IG0V-rfE

Headline image courtesy of the Missouri Department of Conservation